Feminism is a ideology that defence female gender rights and also to empowered female inequality in the society.

While i was thinking, why females put makeup ? Is that just because to get attraction or to just to become more beautiful ? After a deeper research, make up is not just being beautiful.  ?  But somehow this had created a conflict that people often say that woman with makeup are an anti- feminism. I would to have a argument to said, people often say that wearing a makeup is to appeal for man, while research shows that men prefer "natural" instead of makeup, i don't see how makeup are anti feminism action though while feminism are more that what you put on face. Feminism is an ideology to express their self, if wearing a make up could make you more confident why not?

Why woman even bothered to put makeup ?

Wearing makeup is not a chose and it is to please men, but is a self esteem to myself. While makeup for woman are like a painting on a canvas, it become an art and turning something beautiful. 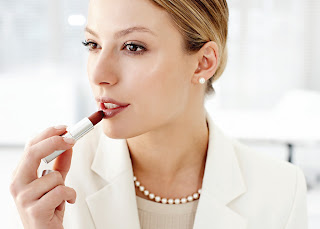 Which part that determine a women to be feminism.
Lipstick feminism is so called the "third wave feminism". Some feminist they believe that lipstick feminism are a way of archiving equal right for woman but also a dilemma of displays in sexuality.

wiseGEEK. 2003. What is Lipstick Feminism? (with picture). [online] Available at: http://www.wisegeek.com/what-is-lipstick-feminism.htm [Accessed: 7 Aug 2013].